Buffalo school officials and BTF going back to court 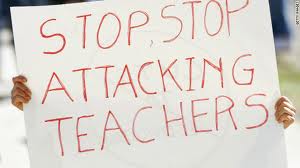 The teacher evaluation agreements the NYS Education Department imposed on school districts across the state may have to be revisited after the Buffalo Teachers Federation voted Thursday to challenge the Buffalo school district in court over a dispute about the memorandum of understanding the superintendent and the union signed earlier this year.

This new legal challenge to the district reneging on the MOU to the teacher evaluation agreements may possibly open up a new discussion about the legality of imposing evaluations based on information and documents not readily available to sufficiently evaluate teachers in public school districts throughout the state.

Sadly, the equity firms, banks, and hedge fund investors were the largest donors to politicians including Gov. Andrew Cuomo who sought out Democrats for Education Reform for support and donations.  In return these politicians including the NYS Board of Regents coalesced  to revamp education law and to install state education commissioners sympathetic to their reform agenda.

And it was to weaken the unions especially teachers and rid the system of tenure by copying a system of employee evaluations developed in the private sector where the vast majority are at-will employees.
Even an attempt now to find information on tenure Education law 3020a is impossible on the NYS Education Department website.

As a result of the changes to rid district of tenure a new teacher and principal evaluation system emerged that Gov. Cuomo signed "chapter 103 of laws of 2010 that added a new section 3012c to Education law that established a comprehensive evaluation system for classroom teachers and principals  based on the APPR.

The BTF and district officials should be allowed an opportunity to submit the MOU as part of its agreement if it was not done earlier with the documents it sent to the state to assuage the state education commissioner and the governor.

It's unfortunate that caught in the middle of this tug-of-war between the union, district, SED and the governor are the teachers and the children.

They deserve a less punitive teacher evaluation system, as well as their tenure rights.
Posted by El Diablo at 10:18 AM No comments: