The Buffalo News education blogger, Mary Pasciak reported $5.6 million in aid likely restored to six schools after State Education Commissioner John B. King issued a pubic statement he will approve the latest teacher evaluation plan, the Buffalo Teacher Federation and the district had agreed upon on Wednesday. King threatened to stop the SIG funds to the Buffalo schools in December after no "approvable" teacher evaluation plan was submitted to him by the required deadline as stipulated in the application both parties had previously signed with the State Education Department. Pasciak wrote, "under the proposed agreement, any teacher in a school where 20 percent or more of the enrolled students are not native English speakers will have 2 points added to their overall evaluation score, which is out of a possible 100 points. " Also, allowances in the attendance of chronically and severely absent students provided only in the section where 20% of the scoring exist. Buffalo schools to receive the funds are Dr. Martin Luther King, International School #45, Bennett, Burgard, Riverside, and South Park High Schools. The jobs of four attendance teachers at these high schools nearly lost as well until the district decided not to disrupt schools mid-year similar to 2005 when 15 of these teachers were laid off during a union dispute over health care insurance. That the district and BTF agreed on a teacher evaluation plan under the tenure of interim Super Amber Dixon moves her closer to seriously being the top contender for superintendent of Buffalo schools.
Posted by El Diablo at 3:09 AM No comments: 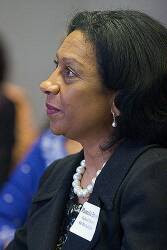 After much anticipation last night Buffalo Board of Education released the names of the 3 superintendent finalists for the Buffalo Schools vacant since former super James Williams had stepped down amid controversy last year.

The finalists were Edward Newsome, Pamela Brown and interim Super Amber Dixon.  Dixon on the job as interim is the top contender followed by Pamela Brown noted as a specialist in second language acquisition.  Formerly from the Philadelphia Schools, she is employed in the area of research in Massachusetts. Newsome doesn't appear to have the second language acquisition or bilingual education background of Brown.  His website cites his expertise in many areas of education but none in bilingual education.

Although a group of stakeholders meet with the finalists today, it's not open to the public or the Board interviews on Friday.  But there is a public reception today after the stakeholders meeting at Waterfront School downtown at 5PM . Some say the search process lacked transparency from inception. Yet, for the first time ever  the School Board allowed the public

into the Board room when the consultants were initially interviewed. Yet the public didn't show up.


Published with Blogger-droid v2.0.4
Posted by El Diablo at 3:22 AM No comments:

The New York State Education Department continued the $32 million 5-year contract to Pearson despite the errors it made in the recent English and math tests.
NY1 Exclusive: Memo Shows Company Aware Of State Test Errors - NY1.com
Posted by El Diablo at 4:10 PM No comments:

Gov. Cuomo raked in $450,000 in Buffalo at fundraiser, while talking about campaign finance reform

"Nothing says Reform like a $50,000 a plate contribution to a governor whose portfolio contains oil and gas holdings while he contemplates the expansion of hydrofracking. It's almost as comical as his Education Reform plan where the top two appointees to NYSED boast a whopping 3 years of combined classroom experience. Or the "state assessments" recycled and sold to NY for $32 million by Pearson (said by many to be his main donors for the 2016 campaign) none of which was without errors, including the infamous Pineapple section that was thrown out in its entirety. I hope the 450K he squeegied out of Buffalo's Brahmin yesterday is enough to cover the gap Cuomo will have come 2016 when he comes looking for a dime from organized labor whom he's thrown uner the bus and backed up over several times. Don't sell the NY condo just yet Governor." SEAN CROWLEY, EDEN, NY on Thu May 3, 2012 , Buffalo News comment.

Published with Blogger-droid v2.0.4
Posted by El Diablo at 9:13 PM No comments: